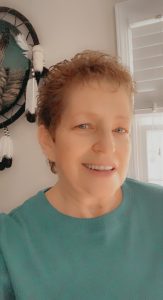 I dialed “911” late evening on 6/12/2018 for excruciating abdominal pain, for which I underwent
emergency surgery resulting in a partial gastrectomy (Bill Roth II procedure), removing the lower 2/3 of
my stomach. A 9.5 cm tumor had perforated the pyloric antrum, explaining the excruciating pain I
experienced. I have an extremely high tolerance for pain. At the time, I was 56 y/o, a single mother, and
worked full-time for decades as a paralegal concentrating in matrimonial/family law and complex
litigation. A PET Scan on 8/10/2018 confirmed the surgical diagnosis that my cancer was Stage 4, initial
pathology indicated adenocarcinoma/poorly differentiated (T4, N2, Mx), and I was “negative” for the H.
Pylori bacteria. Genetic testing returned “negative” results. The tumor tested positive for biomarker:
HER2+ (positive). I was discharged on 6/29/2018 at 95 lbs., and instructed to recover and gain as much
weight as possible prior to starting chemo; my prognosis was “poor,” to be charitable (I overheard some
hospital staff pinning a “6-month ticket” on my head); 8/9/2018, my mediport was surgically implanted;
and I began my 1st-line chemo the following Monday, 8/13/2018 (at 118 lbs., I had managed to gain 23
lbs.).

The side effects of 1st-line chemo (12 biweekly infusions) were both debilitating and cumulative,
compounding with every infusion. At the completion of the 12 cycles of chemo on 1/10/2019, I took a
short break to have a CT scan (1/17/2019) which unfortunately indicated liver metastasis (confirmed by
PET Scan 1/29/2019). In sum, all of that horrific 1st-line chemo was totally unsuccessful! On 2/4/2019, I
began 2nd-line chemo, which continued weekly until 3/25/2019; My secondary pathology report arrived
in mid-March 2019, indicating tumor biomarkers: PDL-1 (CPS score of 80%) and also MSI-H (high), either of
which qualified me for immunotherapy treatment with Pembrolizumab (a/k/a Keytruda, which you may
have seen advertised on television and magazines) which I began Keytruda on 3/25/2019 with infusions
thereafter every 3 weeks; all subsequent CT scans evidenced decrease of the liver metastasis until the CT
Scan on 11/25/2019, which indicates “No Evidence of metastatic Disease” (a/k/a “NED”). I am still treated
with Keytruda, had infusion #49 on 1/19/2022, and still remain “NED.” My 6-month CT Scans on
1/28/2022 continued to indicate “no evidence of metastatic or recurring disease.” Stage 4 cancer is
treatable but not curable, as recurrence is always possible.

I still experienced debilitating fatigue, “cold” neuropathy, cachexia (muscle waste), and PTSD from 1st-line chemo, along with the additional side effects of the 2nd-line chemo, which included new-additional fatigue and hair loss. I have residual permanent effects from the two (2) lines of chemotherapy: cachexia (which I now have under control), osteoporosis, constant Level 9 pain in my left hip area due to chemo drug Neulasta Onpro, neuropathy for cold-sensitivity caused by Oxaliplatin; and PTSD which is mostly under control except for awakening at 2:00 AM every day. My Stage 4 cancer caused me to cease my employment and go on Federal Disability (SSD). I did not drive again until the Summer of 2019 due to the ill effects of chemo. One of the chemo drugs (Herceptin) from my 1st-line chemo can cause heart damage,
so I am followed for 5-7 years by a highly qualified cardiologist.

Keytruda is a “miracle drug” for many patients: it has been for me. I work very hard to maintain my NED
status. I fight this disease harder each day, additionally in honor of those who suffer from and have passed
away from this cancer. There are countless daily heartbreaking stories, and this cancer has no age
boundaries as there are more and more young people being diagnosed with it. I am very fortunate my
crappy cancer has the correct biomarkers. I am approaching “4 years post-diagnosis,” which is a huge
statistic for this deadly disease, which carries with it the weight of feeling like I’m “waiting for the other
shoe to drop.”

In 2020, I was nominated by the 501(c)(3) organization “Hope for Stomach Cancer” for, accepted by, and
participated in the Congressionally Directed Medical Research Programs’ (CDMRP) Department of
Defense (DoD) Peer Reviewed Cancer Research Program (PRCRP) as a “consumer advocate” (consumer
advocates are comprised of cancer patients). Consumer advocates prepare written and verbal comments
as to the impact of the proposed research on issues such as diagnosis, treatment, and quality of life. It
was such a high honor for me to participate among the professional scientific/medical reviewers to deliver
a cancer patient’s input to the various, numerous proposed cancer research applications.