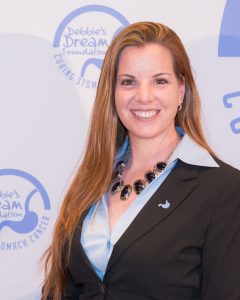 Christy Leonard is a 36-year-old mother/stepmother to 5 boys and is a Data Manager at Perspecta, a Department of the Navy Contractor for over 12 years. She has been married to her husband, Tony Leonard, for 11 years and for 6 of those years she has been his caregiver. Tony was diagnosed with stomach cancer when he was 39 years old, and their youngest son was only 18 months old. The Leonards had been advocates for stomach cancer awareness since Tony’s initial diagnosis in February 2012. They founded the North Carolina East Chapter for Debbie’s Dream Foundation: Curing Stomach Cancer (DDF) and organize the annual North Carolina Golf Tournament & Charity Dinner to raise money for stomach cancer research. Through their efforts, North Carolina legislators have declared November “Curing Stomach Cancer Month” four straight years. Christy has spoken at many events as an advocate and caregiver to include the National Institute of Health NNIR Caregiver Summit in 2017. Tony’s cancer returned shortly after his five year cancer anniversary, putting him at stage IV. Christy continues to care for her husband while raising her children and working a full-time job. She has documented her journey as a caregiver through her blog, DeathToCancer.BlogSpot.com, where she’s received more than 33K hits. She enjoys watching her sons play sports and spending time with her husband watching movies curled up on the couch. “Nothing is more important than family; NOTHING.”