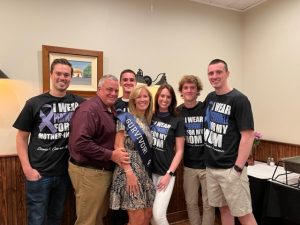 Tomorrow marks five years. Five years since a part of my life ended, and another began. At this moment, five years ago, I was excited. I was looking forward to having removed the offending organ (my stomach). I didn’t want it for another second because the longer it was a part of my body, the second cancer had an opportunity to take over. I had fared well with chemo. Hair loss and fatigue were my only complaints. I would joke, “if I didn’t know I had cancer, I wouldn’t know I had cancer.” But as we all know, stomach cancer is the renowned “silent killer.”
But little did I know of the second part of the surgery-the recovery. I had no idea I would be starting the most challenging phase of my 47 years. The pain was excruciating. The worst I’ve ever experienced. And no one would promise me it would get better. There were many times I thought I was dying. There were many times I wanted to die because the thought of living with that pain for the rest of my life was unbearable. My elderly mother, six siblings, husband, and five children all had a front-row seat to my vulnerability and helplessness.
But five years later, I’m here. The pain did get better. “I had stomach cancer and now HAVE no stomach” became less and less a constant thought in my head.
In the last five years, I’ve watched two children graduate college, two graduate high school, and two get engaged. I danced with my son at his wedding last august. I’ve helped plan my daughter’s wedding in May 2022.
My husband and I traveled to Alaska and Hawaii, celebrated 30 years of marriage, and rediscovered how much we like each other.
A lot can happen in 5 years. I’m just so grateful to God for allowing me the chance. Stay strong and fight on.