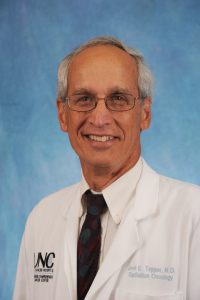 Dr. Joel Tepper is the Hector MacLean Distinguished Professor of Cancer Research at the University of North Carolina, Chapel Hill. He received his undergraduate degree in electrical engineering from MIT, and his MD degree from Washington University, St. Louis. He was an intern at Presbyterian-St. Luke’s Hospital in Chicago followed by a residency in radiation oncology at the Massachusetts General Hospital. He has been a Senior Investigator at the National Cancer Institute and an attending physician at MGH and Harvard Medical School. For the past 25 years he has been at the University of North Carolina in Chapel Hill, as Chair for the first 20 of those years.

He has been an active participant in clinical and translational research in gastrointestinal tumors for many years including Vice-Chair of the GI Committee of CALGB for 14 years. Dr. Tepper is the Co-Chair of the NCI GI Steering Committee that coordinates the NCI Phase II and III clinical trials cooperative group portfolio and has been Director of the UNC GI SPORE grant. He has been Co-Chair of the Colon-Rectal Working group of The Cancer Genome Atlas and has worked on the pancreas and esophageal task forces of TCGA. He is co-Director of the NCI funded UNC Carolina Center for Cancer Nanotechnology Excellence (CCNE). Dr. Tepper has served as President and Chairman of the Board of the American Society for Radiation Oncology (ASTRO) and received the Gold Medal from ASTRO in 2008. He has been a board member of the American Society of Clinical Oncology (ASCO). He was a founding member of the Clinical and Translational Research Advisory Committee (CTAC) that advises the Director of the NCI on the NCI clinical and translational research portfolio and has worked for NCI on PATS (Process to Accelerate Translational Science) and the OEWG (Operational Efficiency Working Group). At present, he is also on the working group for the National Clinical Trials Network of the NCI.