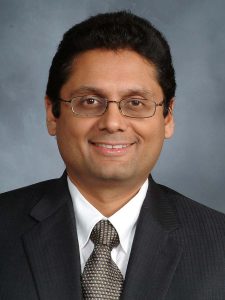 Dr. Manish A. Shah completed his undergraduate education at Johns Hopkins University in 1991, going on to receive his Medical Degree from Harvard Medical School/MIT Health Sciences and Technology program in 1996, graduating Magna Cum Laude. He completed his Internal Medicine Residency training at Duke University Medical Center in 1999, and his Fellowship at Memorial Sloan-Kettering Cancer Center in 2001, where he served as Chief Oncology Fellow. Dr. Shah was recruited from Memorial Sloan-Kettering Cancer Center in order to serve as Director of the Gastrointestinal Oncology Program within the Division of Hematology and Medical Oncology and the Center for Advanced Digestive Care at Weill Cornell Medical College/ NewYork-Presbyterian Hospital. Dr. Shah is the recipient of several awards including the American Society of Clinical Oncology’s Young Investigator and Career Development Awards, as well as the Journal for Surgical Oncology’s Donald L. Morton Award. Most recently, Dr. Shah was the recipient of the Bartlett Family Associate Professor for Gastrointestinal Oncology award. Dr. Shah is a distinguished peer-review funded investigator and has led several Phase I, II and III clinical trials in GI malignancies. His areas of translational research interests focus on improving the understanding of upper GI cancers, hereditary GI malignancies, genomic evaluations of malignancy, and the effects of the external environment on the genetic causes of malignancy.

In addition to his research pursuits, Dr. Shah is involved in several extramural professional responsibilities. Dr. Shah is a member of the American Society of Clinical Oncology (ASCO) and the American Association for Clinical Research (AACR). He has authored several books, including Dx/Rx: Upper Gastrointestinal Malignancies: Cancers of the Stomach and Esophagus, as well as 100 Questions and Answers about Stomach Cancer. Dr. Shah is the Editor for The Management of Complex Cases in Gastrointestinal Oncology Case Series for the Journal of Gastrointestinal Oncology and the Series Editor for the Dx/RX: Oncology Series published by Jones and Bartlett Publishers. In addition, Dr. Shah serves on the Editorial Board of the Journal of Clinical Oncology, and as a reviewer for several high-impact journals, including Journal of the American Medical Association, PLOS One, and Lancet Oncology. Additionally, Dr. Shah serves as Chair of the Scientific Advisory Board for the DeGregorio Family Foundation for Stomach and Esophageal Cancer Education and Research, and Vice Chair of the National Cancer Institute’s Gastroesophageal Task Force.