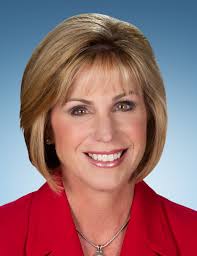 Kristi Krueger has built a solid reputation as an award-winning medical reporter and effervescent anchor. She joined Local 10 as co-anchor of the 5:30 p.m. newscast and “Eye on Health” reporter in August 1993. After many years co-anchoring the 6 p.m. and 11 p.m., Kristi now co-anchors the Local 10 Noon News.

In addition to her anchoring duties, Kristi specializes in medical reporting in “Kristi’s Good Health” segments. As a mother, Krueger understands the importance of receiving useful and timely health news striving to bring viewers cutting-edge information that allows them to make informed choices about their well being.

Kristi began her broadcast career at WWSB, in Sarasota. In September 1988, she was promoted to co-anchor of the weekday 6 p.m. and 11 p.m. newscasts. In 1990,Krueger became the weekend anchor and medical reporter for WDIV-TV in Detroit, Michigan before heading to WPLG.

Kristi’s many awards and honors include:

Kristi is very active in the community, serving on the Board of Directors of the Pembroke Pines Theater of the Performing Arts, the Epilepsy Foundation of South Florida, and volunteers as a lector at St. Paul Lutheran Church in Weston as well as at her children’s school.